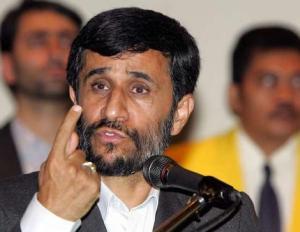 Some church leaders in the US are coming under fire for hosting an interfaith breakfast with Iranian President Ahmedinajad.  Why?  Opponents of the affair point to Mr. Ahmadinejad’s nuclear stonewalling, threats against Israel, and questioning of the Holocaust.

The last two are contrivances thrust upon the consumer by a compliant corporate media whose interests is in conflict which sells papers, and access to a government which determines that access based on the “friendliness” outlets give to government’s positions.  Juan Cole has done a pretty good job of blasting holes in the “threats” the Iranian president allegedly made against Israel, attributing the record to sloppy investigating by the press and even sloppier translations of what Ahmadinejad said.  Accuracy has never been a forte of the American press. The presidential candidates are falling over themselves in making Ahmedinejad the next Osama bin Ladin.

In the heat of the campaign, Obama surely overreached himself in appearing to advocate barring leaders of member states from addressing the United Nations because their views are obnoxious to Americans. He also fell into the trap of declining to make a distinction between anti-Zionist views and anti-Semitic ones. If a policy of exclusion had been adopted by past administrations, Soviet Premier Mikhail Gorbachev could not have announced from that podium the reduction of Red Army forces in Eastern Europe in 1988. And if anti-American statements should trigger the denial of a visa to come to New York, should Nelson Mandela, who called the United States the “most dangerous country in the world,” be excluded, too?

Obama’s assertion that Iran’s civilian nuclear energy research program constitutes a “grave threat” may or may not be true. The 2005 National Intelligence Estimate put Iran at least a decade away from having a nuclear weapon if it was trying hard to get one and if the international environment was conducive (i.e., if Iran could import all the equipment it needed easily). Neither of those conditions actually appears to exist, so Iran is very far away from having a bomb. The 2007 National Intelligence Estimate on Iran, parts of which were released last December, concluded that Iranian scientists have not done any weapons-related research since early 2003.

As Ahmadinejad pointed out to Larry King, no country has been as intensely inspected by the International Atomic Energy Agency as Iran. No regularly inspected country has ever developed a nuclear bomb. Although the IAEA’s Mohamed ElBaradei has expressed frustration that Iran failed to declare its nuclear research program before 2003, he continues to say that in current inspections, “the Agency has been able to continue to verify the non-diversion of declared nuclear material in Iran” to weapons purposes. This consistent IAEA finding through recent years raises the question of whether Obama is right to be so categorical on this issue.

Despite the “white noise” coming from media and politicians looking to score points with voters, the organizers of the “iftar” are pressing on because of their belief in dialogue.

“There’s been background work spanning years with the previous reformist president, Mohammad Khatami, which goes on regardless of the vicissitudes of political leadership,” says William Vendley, secretary-general of Religions for Peace USA, part of a 30-year-old global body.

“There are many points where we disagree with Iranian policy,” says Mark Graham, AFSC spokesman. “We believe dialogue is the way to understanding and moving past tensions rather than threats and standoffish behavior.”

It’s  very unfortunate the leaders of the strongest country militarily in the world can’t muster the courage of their conviction to get beyond the ethnic/religious baiting of Iran and its leadership.  More than half a century has passed since that country was thrown into turmoil because of a US backed coup against an Iranian government and relations with Iran post the Shah era have been marked with animosity and deceit.  But because Iran sits on a large quantity of the world’s oil supply one can only expect relations to be based on a power struggle whereby America seeks to dominate the Iranian government and control their oil supply.  Men of courage, however, seek relations on a level of mutual benefit and understanding.

“What we will never cease doing is being absolutely forthright and direct; one goes into discourse intentionally looking for appropriate opportunities to clarify concerns that are deeply felt,” Dr. Vendley says.

For that I salute them!