We here like to highlight the terrorists that manage to escape mention at the hands of neo-cons and Islamophobes who like to always remind us of the Muslim terrorists in our midst.  Usually you find their terrorist committing all the crimes of murder, plunder and violence on the homeland so much so that they account for not a single U.S. civilian being killed by a Muslim terrorists looking to take his place among the 72 virgins since 9/11…not one.   However, fourteen soldiers have been killed, thirteen of those during the Fort Hood Shooting.  And did you know for the 25 years between 1980 and 2005, only 6% of all acts of terror were committed by those fanatical jihadists Muslims, yet the phobes would have you believe that all terrorists are Muslims. 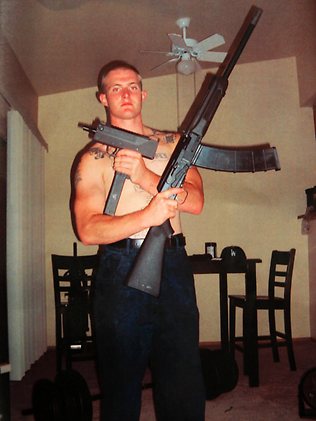 So here are a few of the non Muslim terrorists they forgot to mention to you, and these have popped up within the last week.  First place goes to the guy who killed a park Ranger in Washington state and is being hunted by law enforcement there.  He’s not Muslim, his excuse for terror is he’s a veteran with PTSD back from Iraq and not able to handle the stress of living in peace.  We had to breed people like this guy……those who need war to survive or find meaning in killing to get them to do things against human nature, like invading and killing people in their own country for no reason whatsoever.  We just haven’t figured out how to turn the switch off, so Benjamin Colton Barnes, killed a Mt. Rainier park ranger in cold blood.  Along the way to perdition, he had run ins with the mother of his baby who was smart enough to see the danger he posed and requested a court order to keep him away from her and their baby because of his constant threats of violence against them and himself.  A ticking time bomb if there ever was one, and his singular act of murder against a federal employee is certainly one of terrorism, but the only place you will read him being called that is here on the pages of Miscellany101.

The next act of terrorism that more closely reminds us of 9/11 since the Christmas underwear bomber than any other is this young man of distinction…..a man with a military background as well who tried to get on an airplane with explosives.  Racial profiling was probably not being used when he tried to board a plane, just good old fashioned application of the rules for everyone.  Perhaps there are some people who normally carry explosives in their luggage whenever they travel, but we usually call such people terrorists, splash their pictures across the pages of all the papers and make sure they are public enemy #1.  Trey Scott Atwater tried to board a plane in Texas’ Midland Airport over the weekend and was found to be carrying military-grade explosives.  We have the dreaded TSA to thank for this guy’s arrest.  Atwater’s charge is attempting to board an aircraft with an explosive, yet no mention is made of the amount of explosive in his possession.  Atwater is of the right persuasion to escape the terrorist charge, but not here at Miscellany101.

Finally, it appears there is a gang of terrorists running amok in the New York city area, targeting Muslim places of worship.  I don’t know how else to classify such miscreants other than with the designation terrorist for they seem to operate at night via drive by bombings of random targets in the area.  They are reminiscent of that other all American terrorist organization, the KKK, but you don’t hear them called that anymore these days either.  It appears, in the minds of too many in America, terrorist is a pejorative term with a specific connotation that means only Muslim or Islam.  As we noted before however, that group should be the last one you should worry about for they are the ones who commit the smallest amount of  terrorist acts in America, unless you categorize all the other acts of terrorism committed by non Muslims as something other than terrorism.

2 thoughts on “The terrorists that got away”