Keith Olbermann has found his voice again and the American airwaves are better off because of it.  You probably know the various manifestations from UPI to CNN to ESPN to MSNBC to Current TV.  His resume includes all the prominent broadcasting companies and now he’s added GQ to the company he’s worked for.  I have to admit a personal bias…..I love his passion and his commitment to political diversity so you will most likely find links to some of his commentaries here.

On this occasion he’s talking about Hillary Clinton’s remarks about Trump’s deplorable supporters.  You remember the controversy right, where she said this

You know, to just be grossly generalistic, you could put half of Trump’s supporters into what I call the basket of deplorables. Right?The racist, sexist, homophobic, xenophobic, Islamaphobic — you name it. And unfortunately there are people like that. And he has lifted them up. 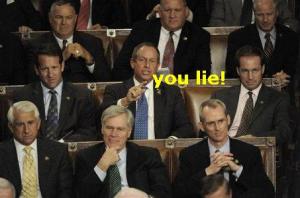 Those two words began the turmoil of American politics for the next 8 years and accelerated America’s descent into political chaos the likes of which the country hasn’t seen for over 100 years.  Doomsayers have been signaling the end of the world since mankind has lived communally but Joe Wilson’s verbal ejaculation was unprecedented for American politics and is foreshadowing.

It was Barack Obama’s first State of of the Union address as President.  He had barely taken the reins of political power; had not even put his imprimatur on the country’s direction yet South Carolina congressman Wilson felt the very presence of Obama warranted this indiscretion. At that point in his address Obama was talking about illegal immigration and whether they could qualify for health insurance legislation that he was trying to pass at that time.

“There are also those who claim that our reform effort will insure illegal immigrants,” Obama said. “This, too, is false — the reforms I’m proposing would not apply to those who are here illegally.”

As it turns out the President was right Obamacare does contain an explicit prohibition against providing federally-subsidized coverage to immigrants who cannot prove they are here legally but that’s not what really caused Joe Wilson’s ire. Rather it was the Southerner in Wilson that forced him to take America back to the advent of Radical Reconstruction when southern states, buckling under and humbled by their defeat at the hands of the Union felt it necessary to subdue their black citizens even though those very citizens were granted full citizenship, the right to vote and equal protection under the law.

These rights were codified in the 13th, 14th, 15th amendments and the civil rights act of 1866 which granted citizenship and the same rights enjoyed by white citizens to all male persons in the United States “without distinction of race or color, or previous condition of slavery or involuntary servitude.” Even though African-Americans were free the reality is

“most Southern whites could not accept the idea of African Americans voting and holding office, or the egalitarian policies adopted by the new governments. Beginning in 1867, Southern(ers)….. launched a campaign of vilification against Reconstruction, employing lurid appeals to racial prejudice as well as more measured criticisms of Reconstruction policies.

and so the next 100 years proved to be the most tumultuous  and politically oppressive for America’s black citizens as well as the most advantageous and rewarding for whites. You Lie has been on the lips of black Americans since that time.  They say it in response to their misplaced reality, the freedom and equality they were promised but has yet to materialize; they say it silently to themselves whenever they hear a politician talk about his or her ideas for a post racial society; they say it whenever they hear the explanation for why an unarmed black man is shot by police.  Mr. Wilson, on the other hand aimed it at what many saw as America finally fulfilling its promise, potential.

Obama brought out the ugly in America. The country built on the principles of a white gentry land owner class was not ready for him despite the fact that those outside that class were.  America’s present day answer to the 21st century’s Reconstruction is Donal Trump.   He’s been brewing on the American political landscape for some time with obvious and disastrous results and he’s been consistent in those outcomes.  Let’s start with, albeit one of many, Trump’s race baiting adventures dating back to the brutal rape of a white jogger in Central Park in May 1989 which received widespread media attention. 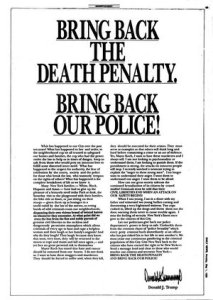 Trump took out a full-age ad in four New York City newspapers with the title “BRING BACK THE DEATH PENALTY! BRING BACK THE POLICE!” He did not specifically reference the Central Park jogger attack in the ad, but its timing made the connection inescapable and everyone in NYC knew who he was referring too.  New York was at a very racially charged time; crime was high and would go higher and the Central Park jogger case had all the ingredients of a white female allegedly attacked by a black marauding gang  with others bursting the seams of their neighborhoods and only the police

to keep them back.  It was easy for Donald Trump to appeal to that mob like mentality and he did it with aplomb in much the same way he’s doing today. If you’re wondering his timing couldn’t have been more off.  The four teenagers he wanted to kill, execute were entirely and completely innocent of their crime and exonerated.  The guilty party was found, confessed and languishes in jail but the mood was set and some could say the city with its draconian stop and frisk policing has set an ugly tone in law enforcement for this country.

There’s something about where the country is today that attracts his presence and made  him the presidential candidate for the Republican party.  He has been enabled in no small part by the media which has treated his candidacy with a legitimacy it does not deserve.  Rather they continue to cover it because it is an extraordinary revenue source.  CBS’ executive said just that, “It may not be good for America, but it’s damn good for CBS” the hidden meaning being the absence of Trump might not bode well for the bottom line.  After all, the saying goes, controversy sells and what’s more important in a capitalist society than a profitable bottom line. But that means giving a microphone to Trump’s many lies…which don’t get called that all.  In fact even when they are demonstrably proven as lies the media reports them in the process of a political speech and then somehow glosses over them as if he never said them.

Perhaps the most egregious regards Muslims….and two lies in particular stand out for people to stand and shout out You Lie.  The first was his saying he saw on TV thousands of Muslims in New Jersey celebrating the attacks of 911.  He saw that on television…..let that sink in for a minute.  He saw that on a television channel that is licensed by the Federal Communications Commission over United States television channels.  That means it exists in more than Donald Trump’s mind, world. There has to be a record such video was played over the air waves of this country. Right? Fact is there is no such video; it’s all imagined by Donald Trump

Farmer (John Farmer Jr., New Jersey state’s attorney general AND a registered Republican) told the New York Times  that the New Jersey State Police received reports on the day of the attacks that “Muslims were dancing on the rooftops and in the streets of Jersey City and Paterson.” Those reports were investigated and found to be false, Farmer said. “We followed up on that report instantly because of its implications,” Farmer told the Times. “The word came back quickly from Jersey City, later from Paterson. False report. Never happened.”

Never happened! But because it has been put out on the public domain and NOT retracted by Trump 2016 has seen the largest number of acts of violence against Muslims since 911 and the year is not over yet. Lest you think such pronouncements are made in error…here’s the second part of the tandem Trump has aimed at Muslim Americans. This is what he has posted on his website today, September 20,2016

(New York, NY) December 7th, 2015, — Donald J. Trump is calling for a total and complete shutdown of Muslims entering the United States until our country’s representatives can figure out what is going on.

“I never said the term ‘Muslim. I’m saying we’re going to profile people that maybe look suspicious, I didn’t say [if] they were Muslims or not.”

There’s no disconnect between what Trump says and reality. Pathologically one can say there is something  wrong with him but he’s managed to bring on board his campaign apparatus an entire group of people who are in the mold of presidential southern recontructionists….those people who misapplied, institutionalized the law to make segregation de facto despite the gains given by the 13th, 14, 15th amendments.  It goes to show you that despite the legal advances codified by law there are still ways corruption can make gains losses and oppress large segments of the population.  Donald Trump and his campaign is doing just that and he’s able to because no one is willing to stand up and make a simple two word declaration, You Lie!