Anyone who is an appointee in the Donald Trump administration or anyone else within reach of his tentacles that he can fire will be required to ensure him they are ok with his extortion and treason. Please let there be no doubt about that and such an employee in the federal government is highly undesirable. That said the new attorney general is proof positive of this strategy; within a week of taking over that off 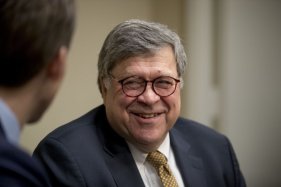 ice he has sent out feelers that the Robert Mueller investigation should be drawing to a close and if you’re Donald Trump the timing couldn’t be better.

Mueller is the consummate professional and a beast. His office has been silent while he racks up convictions and charges of Trump’s inner circles. Given time Mr. Mueller would be knocking on Trump’s door BUT loyalty which Trump extracted from William Barr is at work here and will delay what should be an inevitable, the removal of Donald Trump from office. Barr isn’t an institutionalist he’s an ideologue who like the others in the administration can hold their nose just long enough to get what they want from Trump while giving him the protection (read loyalty by some) he needs to escape what should be a very long, as in for the rest of his natural life, prison term.

One thought on “Loyalty to Donald Trump”