I will never understand how or why any woman would ever want to vote for Donald Trump for anything but a prison sentence. The way he treats women is nothing short of sexual harassment/assault. Hope Hicks and the treatment she has received throughout her time working with him the campaign and in the White House is a textbook example of an emotionally abused woman who found a way to escape from her abuser by resigning from her job working for him.

If it’s true she really knows who Donald Trump is her remaining with him for as long as she did is one sign of abuse where a victim remains with her abuser as a survival strategy during captivity or in her case during the intense partisanship that exists in Washington and national politics. Hicks sought solace in some rather unfortunate circumstances….romantic relationships with abusive men who were affiliated with Donald Trump, extensions of him in every way.  Whether they were abusive towards her is something we don’t know at this time but the abuse of her paramours is a matter of public record a record that Hope Hicks chose to ignore. 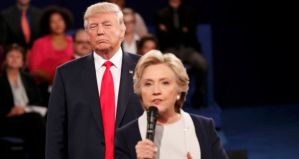 Donald Trump is a particularly aggressive sexual predator, don’t forget who likes to force himself on women or publicly shame them.  Talk of blood and women was a common rebuttal Trump used against his female detractors.

What is it that allegedly drove Hicks to find some sort of normalcy with the likes of Corey Lewandowski who was once arrested for carrying a handgun, three magazines, a holster and several rounds of ammunition into a federal office building? They were mixed up by accident, he said, with his dirty clothes in an overnight bag. Red flag!!! Definite red flag….that Hicks ignored. Lewandowski was also charged with inappropriate sexual behavior by Joy Villa. And when Lewandowski was released by Trump from his responsibilities with the Trump campaign it was Hicks, some would say, who wanted to help him in.

It’s amazing how one person encompasses all that is happening in today’s political discussion centering around firearms and who should, should not possess them.  Lewandowski is one who should not own firearms.

Yes, Hicks went on to have a relationship with another Trump aide who was twice married before being involved with her and who abused both of his former wives in a way that had to be known by Hicks but the thing that bothers me the most in all these trysts is how Donald Trump reportedly talked about this valued aide, Hicks in front of others. In what could only be described as slut-shaming Trump told Hicks not to worry about Lewandowski since she was the best piece of tail he would ever have…Said comment was embarrassing enough to send her out of the room but it also shows how Trump views people in his orbit and more importantly women. Pundits trying to understand and explain Hicks’ sudden departure from the White House talk about how important she was to Mr. Trump, how indispensable, important and well-liked she was yet none of those descriptions square with the language of slut-shaming Trump used in the presence of others as if she was a “thing” a commodity to be valued based on how well she sexually satisfied Lewandowsky. This is the sign of the times where the President of the United States sees people who work with him as sexually satisfying or sexually gratified. Those who voted for him have to figure out in which category they fall.