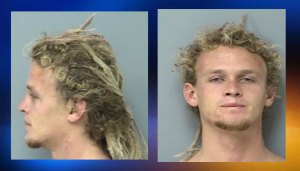 I’m not a big fan of the “police state”.  It is often time abusive and tramples on the rights of citizens.  The story of the cops blasting into the house of someone they thought was issuing internet threats against the local police department is just one very small example of a police force out of control.  Of course excessive policing is about control over the citizenry not about protecting them.  Diligent, aware citizens are generally able to protect themselves; police only need to mop up what’s left.

This story is an excellent example of the ability of a homeowner to defend himself and his family and the keystonesque inability of the local police force to pick up where the homeowner leaves off.  Awakened late at night by noise, the homeowner, Joe Pacetti found this whacked out individual, Jeremiah Haughee (pictured above) sitting on Pacetti’s roof, and otherwise invading his property.  The homeowner  confronts the naked trespasser with a legally owned firearm and a struggle ensues.  The property owner joined by his son is able to subdue  Haughee and in the course of the struggle is smart enough to give his firearm to his wife in order to avoid injuring himself, his son or even the trespasser!!  Evidently he realized he didn’t need to shoot him.  Wow….what a guy!  Unfortunately, the police have to get involved and they do, in a blundering sort of way.  Where a single homeowner and his son and wife are able to subdue Haughee, it took 5 police officers to get him into their car.  Oh, and we forgot to mention the number of times they  tasered  him before doing so.  Five officers and repeated tasing to do what it took one man and his son to do.  I would have preferred the homeowner take Haughee down to the police station himself.

I can’t speak for the property owner…no doubt he was glad to have the police come and help him out, but I can say that he’s an excellent model of how to do things right!  He’s a responsible firearms owner who recognized the danger of engaging  someone with his weapon in his hand at the same time realizing that the weapon was not the appropriate way to deal with the situation, (Remember Rodriguez in Texas that we wrote about yesterday??) was able to safely secure the weapon and deal with the situation so that the invader was no longer a threat to him or his family.  Bravo!!  The Pacetti family needs to be given the keys to the city where they live.  I’m not trying to be funny here….I applaud that kind of diligence and competence.  We need more of it from our citizens.  It shows we can protect ourselves, without the oppressive and abusive powers of police departments; unfortunately it also shows that those who are supposed to protect and serve usually get in the way!  Citizens 1, police 0.