…..and FoxNews has lost its mind!  In a theme picked up by most Islamophobes, FoxNews went on the air with several different shows ( see here and here ) claiming The Council of American Islamic Relations CAIR, was able to get an exemption from TSA for Muslim women travelers so that they would not have to go through invasive full body pat downs.  Of course it was a lie, easily proven as such with a little bit of investigation which  when certain groups are mentioned by certain individuals NEVER gets done.

The policy has always been in place since full body scanners were introduced into airports that one could refuse going through one but had to subject themselves to a full body pat down instead. In other words the so called naked body scanners are optional for the flying public.   The TSA in its own press release has also said that Muslim women or any passenger who is wearing something that is covering their head and upper body because of medical or religious reasons…..using the very general term baggy clothing to describe such garb, and who does not want to remove it in order to be cleared must then face the options of a trace portal, trace detection or pat down of the covered area.   The first two, trace portal and trace detection are done mechanically to detect the presence of explosive residue on the body or clothing of someone.

Anyone who refuses AIT or full body image scanning that clearly shows the naked human body, MUST go through the invasive groping body search or pat down.  It is significant to point out that CAIR and other Muslim groups in America have declared the AIT scanners are not an option for Muslims and encouraged their followers to submit to the pat down search instead.  Why anyone thinks that is asking to be exempt from the prying eyes and groping hands of government is beyond  me. 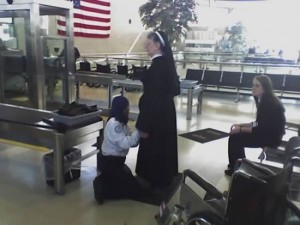 After the full body pat down, a person can risk a secondary screening because of some alarm raised on the part of TSA personnel about the passenger, and this secondary screening involves either trace portal, trace detection or pat down of the covered area.  This screening is obviously meant to discover traces of explosives since the passenger has already been patted down by security and it is here where CAIR suggests that a person may ask to pat down the covered area instead of having TSA personnel do so since that has already been done by a security officer. The intent of the pat down here is to detect explosive residue, not determine what object is under the baggy clothing.  It may be that the person has been in contact with explosive material that is not on their person or in their carry on luggage but have trace amounts found on their clothes which might suggest suspicious behavior and grounds for further investigation before allowing that person on the plane.  What is plain by looking at the steps paggesngers go through is at the point where a woman is asked to have her hijab touched, groped, felt, whatever you want to call it, she has ALREADY gone through the invasive pat down that anyone who rejects the AIT scanners goes through and this part of the screening process is a more fine tuned one to check for exposure to explosives.  Those airports that do not have trace portal devices which cost, according to TSA $160,000 per unit might opt for a pat down of the suspected body part to resolve security concerns.  CAIR goes so far as to say that should a Muslim woman undergo the secondary pat down, she has the right, as any member of the flying public, to have someone with her other than TSA personnel, and the pat down can be done in private, out of sight.  That is not an exemption, rather an explanation of the rights any member of the flying public has available if they should undergo the vigourous and intrusive nature of the security apparatus instituted under the Bush Administration and maintained by the Obama Administration.

Isn’t it an axiom of government and especially a free government that has decided to change course and pursue  infringing upon the rights of its citizens that such a turn of events will take place gradually and that any gains it acquires towards this purpose it will not give up?  That day in 2001 when the TSA became a part of the federal bureaucracy was a day it was stamped forever into government and would attempt with the help of both political parties presently in existence  to get ever increasing powers at the expense of American citizens.  These invasive security measures upon our person are our fault and ours alone for we’ve allowed them, through our votes and the election of officials who engage in the political process for personal power and aggrandizement to usurp the power of the people.  If FoxNews really wants to make headlines, why don’t they investigate how many trace portals bought by TSA are manufactured by one of the two companies who make them, GeneralElectric, parent company for now, of  Fox’s competitor NBC.  Corporate media however, is fixated on its own survival even at the cost of the general public.  It is far more lucrative in the short run to demonize segments of society than it is to look into back room machinations of corporations who solidify by diversification their grip on a terror driven society intent on eating its own.