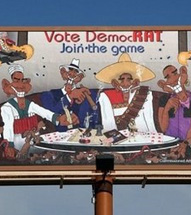 The above billboard can be found in somewhere in the state of Colorado. It obviously takes aim at Obama and shows him in images America has come to fear and loathe the most.  Very stereotypical in nature it appeals to the most base of American suspicions and fears of this President.

With the exception of health care, Obama has managed to continue the policies of the previous president, especially in the area of foreign policy, yet he still is faced with the demons portrayed above.

Paul Snover, the artist who conceptualized the board is known in the area as a Tea Party supporter but he is not the one who paid for the board itself and he won’t say who paid him to do it.  It really doesn’t matter who paid for it, the presence of the board is what matters.  It’s nice to read there is some discomfort about the images, and in these days of spurious talk of ‘freedom of speech’ the board’s presence means the concept is still alive and well in a very divided country but it shows just how serious a problem America has with people and ideas that are even in the slightest bit different than a centuries old status quo that now feels itself besieged by the likes of Obama.