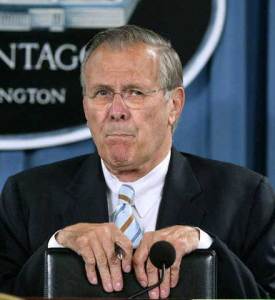 It’s something “progressives” have known since September 12, 2001 but now someone else in the US military has come out and said so.  Hugh Shelton has written a book entitled, Without Hesitation and in it he has some pretty damning things to say about “Rummy”. Of course he’s doing it at a time that is beneficial to him…i.e. he’s plugging a book and while the message of the book is there were some very evil people making policy that drove this country to war, the book’s author didn’t exactly come out and say all this when it might have mattered, but at least it’s being said now.  Better late than never is kind of like the rule to apply I suppose.

I’m slightly amused therefore that Rumsfeld is still a free man, that there’s no talk of citizenship revocation or even a small slight on the wrist jail term for committing what was in effect a war crime.  In the process he endangered the lives of America’s young men and women, displaced millions waging a war on their soil and in the process thumbed his nose at everyone, including the American people.  No matter how we try to glamorize it or give it a patriotic flavor, the US military was abused by the likes of Rumsfeld and his patrons who have now slithered away in the darkness untouched by American law, while those who followed their command and fought for nothing are either dead, physically or emotionally traumatized for life and the lives of their loved ones as well.

Unfortunately, Rumsfeld will have the last word when he releases his memoir next year.  Don’t believe any of it!  Rumsfeld lost all credibility in 2002 when he said, ‘I can’t tell you if the use of force in Iraq today will last five days, five weeks or five months, but it won’t last any longer than that.’