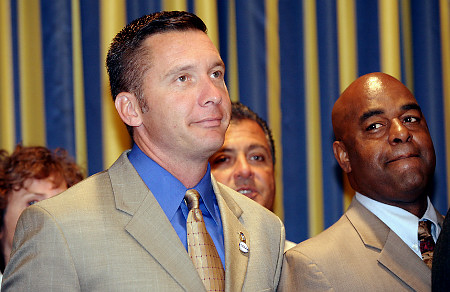 The media, that’s who and with the insertion of the word black men, the media played us the public.  It  was able to inflame American passions about a subject we’re known to want to avoid, and embroil the Obama presidency at a time when it needs public support for issues like health care and Afghanistan.  Turns out the word “black” men was NOT used by the caller who placed the 911 call.  In fact when she was asked if the people she saw were black she said she wasn’t sure, so how did this description get inserted into media accounts??  Anyone?

One other interesting point I noticed about what was heard from the released police tapes is Sgt. Crowley asks the dispatch to send someone from Harvard’s police.  Why?  Gates supposedly supplied both his state’s driver’s license as well as his university identification; did Crowley not accept them, were they not good enough, were they suspect, would he only accept the word of a fellow police officer?   Perhaps this was the cause of Gates’ ire; having done everything he was asked to do, i.e. give identification and then some, it still was not good enough for Crowley to stop what at some point must have been considered harassment by Gates.

The media gets knocked around a lot, and this time, it’s deserved.  If anyone thinks media doesn’t have an agenda, think again.  By touching on a hot button topic, race, the media was able to portray all in a way they determined and at a time and place of their choosing.  That said, this wasn’t an issue of bad policing, as I think it was, but rather a racial issue, which the media made.    One solution to that is to forsake organized, main stream, corporate media and turn to citizenship media.  It has some of the same risks, but it provides you more choices and I am a believer people are their best police, leaders, politicians, defenders, doctors, owners of companies.  Try it.