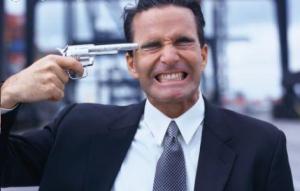 Our parents always told us never speak ill of the dead, but in the case of the guy in this post, I want to wake him up from the dead and slap him silly.  He’s the poster child for stupid behavior.  Why anyone would point a gun to their own head and claim they’re doing that to show people the importance of gun safety is S-T-U-P-I-D.  It’s not enough that firearms owners are given the evil eye by non-owners, and are always threatened or feel threatened with confiscation of their weapons by an over reaching government, but to give opponents of private ownership of weapons the ammunition, pardon the pun, to berate, deride, ridicule, encroach and infringe on that right, is……….well suicide as Mr. Benally found out.  For all the do gooders out there, here’s a tip for you.  Never point a weapon at your head, ever!  And if you’re not smart enough to follow that rule, then don’t do it in front of people and claim to give them a safety demonstration of how to use a firearm!  Jeez.

One thought on “From the ‘he’s an idiot department’”