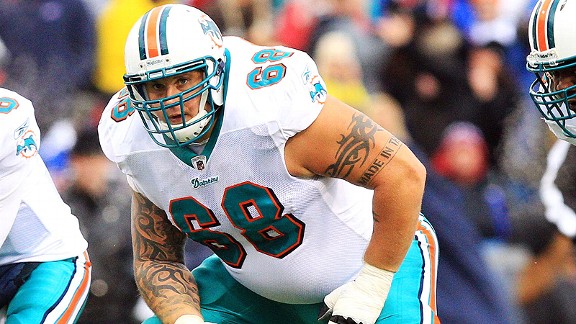 This isn’t solely about using a racial pejorative, it’s about a pattern of conduct that went on in the work place for a very long time and one’s employer did nothing to solve the problem. What would you do if a co-worker repeatedly said or intimated such things to you; you informed your boss and he/she did nothing about it? Most companies have rules/regulations against harassment of any kind, sexual or physical and a NFL football team is or should be like any other company or corporation.  Jonathan Martin certainly should consider a lawsuit against the Miami Dolphins for allowing a hostile work environment to exist  which prevented him, Martin, from doing his job.

Yes, I know football is a manly man sport where people with muscle and speed compete with one another and should therefore be able to protect, defend themselves from unwanted intimidation but who goes to work expecting to have to fight with a co-worker after they have informed their boss of flagrant violations of social conduct or worse company policy? I know there will be too many who will posit that Martin should have beat the crap out of this really social neanderthal Richie Incognito but that’s not we settle disputes in the work place.  Usually we settle them administratively although there is a precedent for going “postal” and using firearms to settle scores.  Martin should expect his employer to reign in an abusive co-worker, not have to duke it out or have a duel to see who is the better man.  Let’s not forget, Martin comes from a university that probably instills in its graduates notions of civility in the work environment.

Interesting find by the BBC; an act of terrorism committed by a terrorist who was first identified as the picture on the left.  Imagine all of the negative connotations conjured up by that image and it was for just those reasons it was released when in fact it’s the image on the right that belongs to the official document of the perpetrator.

The western world’s desire to incite the war of civilizations is so reflexive the even go to the extreme of altering images to make this a reality.

Hours after six people died in a bus suicide bombing, pictures of a passport – showing the suspect wearing a headscarf – were aired on Russian TV. But they were soon called into question.

The first page of Naida Asiyalova’s passport had been published via a National Anti-Terrorism Committee Twitter account, recalls twice-weekly paper Novaya Gazeta. It says that initially no-one picked up on the fact that, under Russian law, it’s forbidden to be photographed for documents in a hijab and simply reported that it had been found at the blast scene. “Only individual bloggers began to wax indignant,” it reports, noting that Asiyalova would not have been able to board a long-distance bus to get from her home in Dagestan to the scene of Monday’s blast, in Volgograd, with that photo in her passport.

Recently I went on a tear on Twitter where I railed:

Is cross racial adoption as much a taboo for Muslims as it is for non Muslims? http://tinyurl.com/atnmgfo  evidently so!

Whose identity do adoption agencies fear will be lost; the adopted child or the State’s?

Where in Islam is institutional racism justified? I ask my Muslim friends but no one can give me an answer!

The cause of my ire which sent me spiraling out of  control was  this article during my daily consumption of news which I read on the web on a daily basis.  What was written there was this one sentence tidbit,

“We also consider the race of the adopting family,” she said. “A black child who lives at the centre would go to a black Emirati family because we don’t want the child growing up completely different.”

This caused me to fire off a letter to a dear friend in which I wrote,

….Muhammad’s (way of conducting affairs in society) says there is not supposed to be any difference between black and white, and where everything else is the same, I.e. religion, language AND nationality why would a Muslim country want to accentuate one of these man made obstructions……

Instead, I wrote to my friend,  I optimistically cling to the position that a society should welcome ANY family, and let’s say for the moment we’re talking about a typical man-woman/husband-wife family absent physical-emotional abuse, taking on the responsibility of adopting a child and raising it according to the norms of that society, be it an Islamic or predominantly Muslim country, or a Christian or predominantly Christian society.  What struck me about the article, even provoked me is that even when there are no impediments to a society coexisting with so many similarities within it self, we, humans place some sort of stumbling block in the way to keep peaceful coexistence and harmony from happening, to the detriment of the society as a whole.  (In the case of the young girl in the article, one has to ask how long will she languish in legal limbo while authorities  try to find a “black” family to adopt her when there may be white families ready and willing to do so now?!) There are as many examples of successful cross-racial adoptions as there are failures, yet, like the half-empty half-full glass analogy, we tend to focus on the negative and by doing so add to its power and impact on us.    I also went on to write  to my friend, without knowing at the time, that the American model of adoption was a far better example to follow, and after reading came to find out this

It’s interesting to see America, the great Satan as it was once called, teaching Islamic countries and the rest of the world lessons those countries should have learned at their inception and which still seem to elude them.

Saw this map on a tweet made by Glen Greenwald where he states, rhetorically I can only assume, how much of a threat Iran is to the US.  Certainly he doesn’t mean to the “homeland” but it’s hard to imagine who else Iran is threatening with the demographics illustrated above.  I’m sure we can find someone who will be scared enough to insist America use its peace dividend gained by a withdrawal from Iraq to fight a war with Iran.  Stay tuned.

This is the life for some who live in America.  For too long, America has allowed itself to be divided along lines of color, ethnicity, and now religion.  Our failure to address each of the previous wrongs we have inflicted upon members of our society mean we will continue this progression of oppression and racism which will only lead to the demise of our way of life.  Far greater than any hostile state we have had to face in our past, the biggest and greatest threat to America has always been Americans and their lust for violence and bloodshed.  The Civil War, an antiquated battle fought over a century ago, still stands as the biggest killer of Americans of any war since, including all the ones we’ve fought with the latest gadgetry.

Unfortunately, we don’t reflect on that; instead we sweep it under the rug and or ignore it altogether; which only increases our peril.  Wake up America!