There are plenty of people willing to “front” for THE REPUBLICAN PARTY in its fight against the Obama campaign, and none more diligently than the pages of the Drudge Report.  They are still running, as I type this, a story about a McCain volunteer who was robbed and then assaulted after it was discovered she was a John McCain supporter. The woman’s story is apparently so fishy that even those on the right of Drudge don’t support it.

Police planned to administer a polygraph test to Ashley Todd, 20, because her statements about the attack conflict with evidence from the Citizens Bank ATM where she claims the incident occurred, police said.

When it’s debunked, that story of it being a hoax won’t grace the pages of PARTY surrogates like Drudge who will go on to other sleaze.  The image below also appeared on a DrudgeReport page with the caption below: Obama +7.3 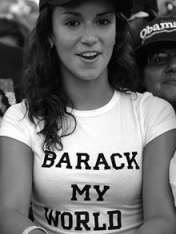 There is much more THE REPUBLICAN PARTY has up its sleeve. The late surge of Republican supporters for Jesse Helms who aired a racially charged commercial in his race against African-American Harvey Gantt was produced by some of the same people who have played a part in Party politics up to this point! The art of subliminal advertising in an election as historic as this will be used to the maximum degree to give the advantage to McCain.

But let’s not forget that today’s REPUBLICAN PARTY doesn’t always feel the need to be so subtle in their message.  Colin Powell’s endorsement of Obama has already been attributed to race by many on the Right.  Limbaugh suggests Powell is an “uncle Tom” and should give back his four stars to Ronald Reagan and/or George H.W. Bush because they weren’t black.  But the excuse that Powell’s endorsement is about race ignores the fact that a lot of other people are endorsing Obama that have nothing at all to do with race but with the direction they perceive their candidate is going to take the country.  Kenneth Adelman, Chris Buckley, Scott McClellan, former Republican governor of Massachusetts William Weld all come to mind.  Would Limbaugh et.co say that black supporters of McCain back him because he’s white?  The idiocy of THE PARTY’S surrogates and THE PARTY itself is apparent.  One should expect much more of the same thing in the days remaining.

UPDATE ON THE ASHLEY TODD STORY

It appears her story is already falling apart and all that remains is why she came up with such a really big lie.  It’s not unusual for people to use racism to cover their personal faults.  The man who shot his wife in Boston and blamed it on a non-existent black thug or the teenager who claimed she was kidnapped and raped by white men in upstate New York, or the woman who drowned her children in South Carolina and claimed they were hijacked by a black bandit said these things when elections weren’t at stake. So the fault for why this was tied to an election lies at the feet of a corporate media that likes to sensationalize, and to the political hacks who want to advance their candidate at the expense of the welfare of the society.  Ms. Todd has “issues” and I hope she gets them resolved, but we as a Nation have the same issues that need fixing and unless we get help for them, we’re as likely to continue down the same road of destructive behavior as this young woman.