I HAVE been a practicing Christian all my life and a deacon and Bible teacher for many years. My faith is a source of strength and comfort to me, as religious beliefs are to hundreds of millions of people around the world. So my decision to sever my ties with the Southern Baptist Convention, after six decades, was painful and difficult. It was, however, an unavoidable decision when the convention’s leaders, quoting a few carefully selected Bible verses and claiming that Eve was created second to Adam and was responsible for original sin, ordained that women must be “subservient” to their husbands and prohibited from serving as deacons, pastors or chaplains in the military service.

This view that women are somehow inferior to men is not restricted to one religion or belief. Women are prevented from playing a full and equal role in many faiths. Nor, tragically, does its influence stop at the walls of the church, mosque, synagogue or temple. This discrimination, unjustifiably attributed to a Higher Authority, has provided a reason or excuse for the deprivation of women’s equal rights across the world for centuries.

At its most repugnant, the belief that women must be subjugated to the wishes of men excuses slavery, violence, forced prostitution, genital mutilation and national laws that omit rape as a crime. But it also costs many millions of girls and women control over their own bodies and lives, and continues to deny them fair access to education, health, employment and influence within their own communities.

The impact of these religious beliefs touches every aspect of our lives. They help explain why in many countries boys are educated before girls; why girls are told when and whom they must marry; and why many face enormous and unacceptable risks in pregnancy and childbirth because their basic health needs are not met.

In some Islamic nations, women are restricted in their movements, punished for permitting the exposure of an arm or ankle, deprived of education, prohibited from driving a car or competing with men for a job. If a woman is raped, she is often most severely punished as the guilty party in the crime.

The same discriminatory thinking lies behind the continuing gender gap in pay and why there are still so few women in office in the West. The root of this prejudice lies deep in our histories, but its impact is felt every day. It is not women and girls alone who suffer. It damages all of us. The evidence shows that investing in women and girls delivers major benefits for society. An educated woman has healthier children. She is more likely to send them to school. She earns more and invests what she earns in her family.

It is simply self-defeating for any community to discriminate against half its population. We need to challenge these self-serving and outdated attitudes and practices – as we are seeing in Iran where women are at the forefront of the battle for democracy and freedom.

I understand, however, why many political leaders can be reluctant about stepping into this minefield. Religion, and tradition, are powerful and sensitive areas to challenge. But my fellow Elders and I, who come from many faiths and backgrounds, no longer need to worry about winning votes or avoiding controversy – and we are deeply committed to challenging injustice wherever we see it.

The Elders are an independent group of eminent global leaders, brought together by former South African president Nelson Mandela, who offer their influence and experience to support peace building, help address major causes of human suffering and promote the shared interests of humanity. We have decided to draw particular attention to the responsibility of religious and traditional leaders in ensuring equality and human rights and have recently published a statement that declares: “The justification of discrimination against women and girls on grounds of religion or tradition, as if it were prescribed by a Higher Authority, is unacceptable.”

We are calling on all leaders to challenge and change the harmful teachings and practices, no matter how ingrained, which justify discrimination against women. We ask, in particular, that leaders of all religions have the courage to acknowledge and emphasise the positive messages of dignity and equality that all the world’s major faiths share.

The carefully selected verses found in the Holy Scriptures to justify the superiority of men owe more to time and place – and the determination of male leaders to hold onto their influence – than eternal truths. Similar biblical excerpts could be found to support the approval of slavery and the timid acquiescence to oppressive rulers.

I am also familiar with vivid descriptions in the same Scriptures in which women are revered as pre-eminent leaders. During the years of the early Christian church women served as deacons, priests, bishops, apostles, teachers and prophets. It wasn’t until the fourth century that dominant Christian leaders, all men, twisted and distorted Holy Scriptures to perpetuate their ascendant positions within the religious hierarchy.

The truth is that male religious leaders have had – and still have – an option to interpret holy teachings either to exalt or subjugate women. They have, for their own selfish ends, overwhelmingly chosen the latter. Their continuing choice provides the foundation or justification for much of the pervasive persecution and abuse of women throughout the world. This is in clear violation not just of the Universal Declaration of Human Rights but also the teachings of Jesus Christ, the Apostle Paul, Moses and the prophets, Muhammad, and founders of other great religions – all of whom have called for proper and equitable treatment of all the children of God. It is time we had the courage to challenge these views.

Well said, sir and thank you! 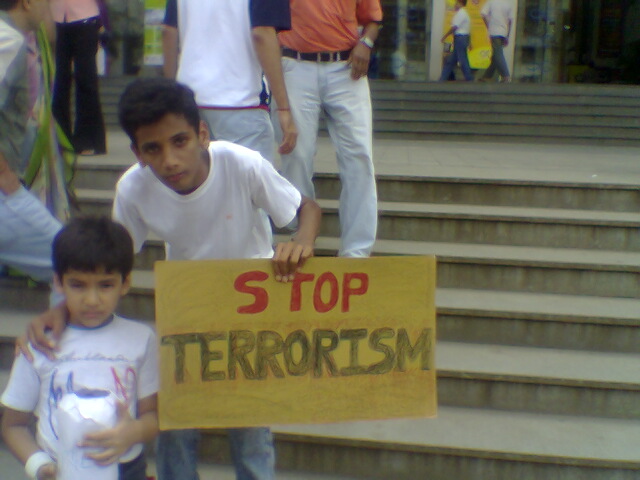 Those who try to make the word ‘terrorism’ a synonym of the word ‘Islam’ try to brainwash us these days by the phrase “I am a Muslim, I am against terrorism”, which many Arabic-language TV stations have started to use during the month of Ramadan, when TV viewing becomes a dominant pastime in the Arab world. This phrase is coined neither by Muslims nor by the real enemies of terrorism; and the objective of funding the intensive broadcasting of this phrase in Ramadan is not exonerating Islam of an accusation levelled against it by Zionists and their allies among the neo-cons in the wake of 9/11. This is clear from the political connotations of this phrase which suggest that “although I am a Muslim; yet, I am against terrorism”. In this sense, our enemies accuse a billion Muslims of terrorism; while Christians, Jews, Buddhists, Hindus and others are exonerated of any link with terrorism.

One is entitled to ask: how many terrorist crimes the Zionists commit against Muslim and Christian Arabs in and outside Palestine, including murder, assassination, home demolition, setting mosques on fire, etc. Yet, have we ever seen a phrase saying “I am a Jew, I am against terrorism”?

How many war and terrorist crimes have the invading American and Western allied troops have committed in Iraq and Afghanistan, including genocide, torture and assassination which claimed the lives of over a million Iraqis and hundreds of thousands of Afghanis and Pakistanis. The victims are always Muslims: civilians, women and children. Yet, have we ever seen a phrase such as “I am a Christian, I am against terrorism?”

The fact is that the intensive racist campaign since 9/11, 2001 has targeted Islam and Muslims. If measuring events by their outcomes is the right way, it can be said that 9/11 aimed in principle at finding an excuse for waging a war on Muslims and covering up all the crimes committed by the Zionist and racist Israeli troops in Palestine, like Judaization, expulsion, killing, imprisoning, torture and displacement.

One cannot but ask, are not 1.3 billion Muslims capable of facing this racist campaign through well-informed and open-minded research institutes capable of addressing the West in its own language and style and conveying to it the sublime message of Islam? If this message is spread and soundly implemented, it will be a genuine savior to humanity of all sins and tragedies which destroy spiritual peace and social cohesion.

NetworkLet us remember how the word ‘terrorism’ was coined and how it was used by of the Apartheid regime to brand Nelson Mandela as terrorist; and how all resistance movements have been branded as terrorist by Fascists and Nazis until they triumphed and achieved freedom and independence for their nations.

What we read today on Wikileaks shows that the United States exports terrorism to the world: “Wikileakes releases CIA paper on U.S. as ‘exporter of terrorism'” (Washington Post, 25 August 2010). Three papers described as ‘classified’ by the CIA’s red cell name the Pakistani David Headley and others to show that the U.S. government has become an exporter of terrorism. Headley acknowledged his responsibility for the Bombay attack which claimed the lives of 160 people. The paper adds that “Such exports are not new. In 1994, an American Jewish doctor, Baruch Goldstein, emigrated from New York to Israel, joined the extremist group Kach and killed 29 Palestinians praying at a mosque at the Tomb of the Patriarchs in Hebron”.

It should be recalled that last month Wikileakes published 76,000 secret documents, part of American military files and field reports about the war in Afghanistan. The Pentagon asked for the documents to be withdrawn because they make the American troops and their Afghani agents liable to the charge of terrorism. This coincided with the scandal of Mohammed Zia Salehi, the chief of administration for the National Security Council about whom the New York Times published an article entitled “Key Karzai Aide in Corruption Inquiry Is Linked to C.I.A.” (25 August 2010). Reports confirm that Salehi was released upon Karzi’s intervention because he knows everything about corrupt deals inside the Karzi’s administration. An American official stated that it was common practice to deal with corrupt people in Afghanistan. He adds: “If we decide as a country that we’ll never deal with anyone in Afghanistan who might down the road — and certainly not at our behest — put his hand in the till, we can all come home right now,” the American official said. “If you want intelligence in a war zone, you’re not going to get it from Mother Teresa or Mary Poppins.” (New York Times, 25 August 2010).

This is a clear acknowledgment of the absolute separation between morality and what American troops are doing in Afghanistan. In an article entitled “Making Afghanistan More Dangerous,” Jason Thomas asserts that American troops use mercenaries they call ‘security firms’ in protecting “foreigners, civil-society organizations and aid,” but also corruption money sent in cash in protected vehicles”. (The Herald Tribune, 25 August 2010).

What do these people have to talk about Islam as a source of terrorism? And how could they accuse Muslims of terrorism, while thy themselves are major exporters of terrorism? Can those who use torture, assassination, corruption and wars as their declared method of occupying one Muslim country after another and killing millions of innocent Muslims accuse those who defend freedom, dignity and sovereignty of terrorism?

The phrase which should be promoted on Arabic-language TV channels should be “I am a Muslim, I am a victim of terrorism”. As to our enemies, the stigma of terrorism, war, Judaization, settlement building, home demolishing, assassination and other crimes will haunt them throughout history, because they are the makers of terrorism regardless of their religion.