he’s a prolific liar. It’s even embarrassing to say how many lies he has tallied because doing so is a testament to our tolerance for them. Normally anyone who was so well known for lying would at the very least be ignored or at the most not be given the time of day. But Trump is POTUS and is afforded all the trappings that go with it, unfortunately. That seems to include our attention.

What I want to talk about briefly here are not his lies but his gutter language. Stuff that comes out of Trump’s mouth more closely resembles a swamp than most things that come out of Washington. And when he gives us the double whammy of a profanity-laced lie like the one below it’s even worse for the American people. Take this whopper: “If you don’t support me, you’re going to be so goddamn poor.” I guess he forgot the tax cut he’s enacted or even worse the tariffs he seems to impose for no apparent reason other than he’s mad with “someone”. There are other examples but C-Span has taken to add the disclaimer “The president used language that some may find offensive,” to its replay of his speeches/rallies. So, that’s pretty bad….a cursing AND lying president. But there’s more.

Since when did we become accustomed to an elected official who so blatantly insults in the most derogatory language elected American officials?!?!! Not only does Trump do that but to the delight of his audiences who seem to delight in being incited by his vile language. As only a demagogue can Trump’s abuse borders on the racially tinged using only those terms appropriate for people’s ethnicity, heritage, religion. He’s not even subtle about it. He reaps such terms as lyin’, cheatin’, “Shifty” at congressman Adam Schiff. Women are similarly denigrated in gender centric slurs. You all remember his ‘blood coming out of wherever’ when referring to a female moderator of a presidential debate. More recently he called the Speaker of the House and it seems the only one in government with the courage and guts to stand up to him Nervous Nancy Pelosi….this despite the fact the woman has nerves of steel and was seen doing this: 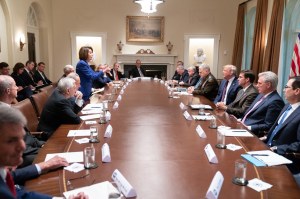 Trump ropes in other to his web of vitriol making them unwanted accomplices to his racism. After calling Senator Elizabeth Warren, Pochantas he repeated the slur at a native American veterans event held at the White House before a group of “real Americans” who should have been there to receive recognition for the bravery and sacrifice they gave in ways that Donald Trump never did to this country. Trump retweeted this barb aimed at Representative Omar, ‘CREDIBLE Evidence Ilhan Omar Married Her Brother–‘We’re Not Sure Her Last Name is Omar!’ after as strongly asserting with “credible evidence” that President Obama wasn’t really an American.  We all know how true that was. So what is it that keeps us going back to and entertaining even for a millisecond this abuse he throws on everyone that’s not a Trumpster or Russian government official? Have Americans so fully embraced reality TV a la Jerry Springer that we’re willing to let anything pass through the lips of Trump and into our ears??!?!  Trump came rolling into office promising to clean out the swamp and whatever he may have done to that end he has refilled it with public invective and abuse the likes of which America hasn’t seen in well over the lifetime of 99% of us. During the House Managers’ presentation before the Senate, several senators complained about the language used, especially by Rep. Nadler when he claimed the presentation made by Trump’s team was a lie. Would that EVERYONE was as vocal about Trump’s language.