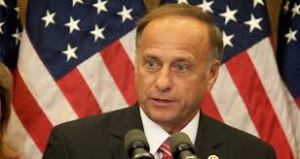 (R.Iowa) has made an ass of himself yet again with his reflections on Islam and Muslims in America.

“The president can dredge up his Crusader history and try to leverage that back against us to guilt us,” he (King) said, referring to President Obama’s remarks at the National Prayer Breakfast, “but what’s this discrimination that’s going on against Muslims in this country? I’m not seeing it. I mean, they’re beheading Christians on the shores of the Mediterranean Sea, and some people are speaking ill of that component. So where are the moderate Muslims speaking up?”

and as usual he and his ilk dredge up the ‘where are the Muslim’s condemnation’ of acts allegedly perpetrated by Muslims as a way of implying the silence of Muslims is their acquiescence towards acts of terror and bigotry.  My response to King’s asinine innuendo is to ask ‘what happened to your Google’? For in making a few short keystrokes on his device he can find countless cries of Muslims denouncing criminality and terrorism committed worldwide. Either Mr. King is too lazy to search them out or is playing demagoguery to his base.  In either case he is certainly not interested in any voice that would contradict his racist notions.

What King said and did is only noteworthy when juxtaposed with this headline where an official for
United Airlines apologizes to Tahera Ahmad, a Muslim passenger, for discriminatory behavior on the part of an airline employee.

While United did not operate the flight, Ms. Ahmad was our customer and we apologize to her for what occurred,” United spokesman Charles Hobart said in a statement. “United does not tolerate behavior that is discriminatory — or that appears to be discriminatory — against our customers or employees.

I guess Mr. King doesn’t know about this any more than he knows about Muslims who condemn acts of terrorism done by other Muslims.  As America continues down its historic path it seems increasingly more interested in ignoring its problems of diversity and racism instead of embracing and solving them. Mr. King is just one more enabler on that trek……..don’t be fooled. We still have a problem and we need to fix it.