Since 2008 when he was only 12 years old, Mike Brown was doomed to his fate of lying in the middle of a Ferguson, Missouri road with his brains leaking out of his head  for four and half hours while his parents wailed nearby powerless to help him. His journey towards this rather ignoble end began in 2008 when Barack Hussein Obama was elected president and white people the country over who were against the notion that an African-American should be president decided to take matters into their own hands and mete out punishment on any black male they could.

As a result Mike Brown didn’t stand a chance that day in August, 2014 when he entered Darren Wilson’s world and that brief encounter which ended with his murder would set the wheels in motion of  institution racism  whereby it was absolutely not possible for him or his family to receive justice. Every institution that is supposed to be responsible for justice in American society was irrevocably stacked against him and every one would collude to make sure his rights would forever be trampled upon and would not see the light of day. 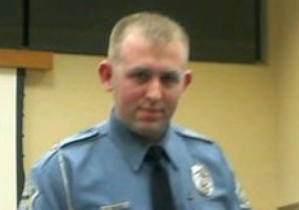 Darren Wilson shot Brown because he refused to be intimidated by a white police officer and Wilson seeing his authority being challenged by a disobedient black boy snapped and gave into a centuries old rage of  the authoritarian class driven by the idea that no black man should ever refuse to do what a white man tells him to do. As a policeman Wilson knew he could set the rules and everything else that followed from his interaction with Brown would naturally go the way he wanted because that’s the way it always has been; there are no repercussions to come from a policeman killing a black man, none.  Wilson’s department rallied around him initially refusing even to give his name to the press corp that gathered to cover this storm; Wilson himself did not write a police report for weeks after the shooting, giving him and his department and the country time to concoct a counter narrative to the one being given by the many witnesses who actually saw the execution.

The media and especially FoxNews and talk radio were willing accomplices in exonerating Wilson of Mike Brown’s murder repeating the now discredited stories first offered up by Wilson himself and eventually by others who were persuaded to give credibility to the lie through sworn grand jury testimony. (More on that in a moment.) This is the same media that has taken every chance to discredit the country’s first black president even if it meant practically swearing allegiance to an adversary.  The

Ferguson police were openly scornful of the Brown family, the media who they were uncertain of would spin their lies and even the federal government, taking great pains to do any and everything they could to show their contempt for whatever it is they were asked to do or provide. In many cases they gave what was not asked, the video of Brown strong arming the items he stole from the convenience store or withheld items they were asked like information on the shooter or Brown’s autopsy.  All of these machinations were done merely to allow the other parts of the white justice system to gear up and pick up where the FPD left off.

When it was finally announced there would be grand jury proceedings the prosecutor responsible for conducting it, Bob McCulloch whose police officer father was killed by an African-American refused to recuse himself from the role instead insisting he be removed by the governor of Missouri who insisted it was McCulloch’s call whether to step down. A better dance of abdication could not be choreographed and with that spectacle came the coup de grace, the complete and utter exoneration of Wilson set up by  McCulloch who presented testimony from witnesses he himself said he knew they were lying and were not even present at the shooting they claimed to have seen.  Instead what these witnesses did was regurgitate the story initially put out by Wilson and the press in the days immediately following Brown’s murder. To the institutions of racism, fairness is allowing known liars to lie about an event in the name of full disclosure before a court of law.  So it should come as no surprise that Wilson would not be indicted but rather be sent away with a rather large sum of money….bounty money as it were, for killing an unarmed, surrendering boy. And because he wasn’t charged with a crime and resigned instead of being fired, although I doubt that would make any difference, it’s quite conceivable he could go on to find employment in another police department…possibly Cleveland, Ohio where an

officer with an equally disastrous record as Wilson was hired after being FIRED from a police department and went on to kill a 12 year old Tamer Rice……and continue his killing spree unabated.

This is how racism works in the criminal justice system…..it is systemic and widespread.  Black men are 21 times more likely to be shot by police than whites and in almost all cases police are not indicted for these at times public executions of citizens. Fix this America!