Now that Gaza is being totally decimated one can see the evil of Zionism.  There is no equivalence between Hamas rockets and Israeli destruction of the Gaza strip.  We’ve seen the two are not even similar; but what has happened is Israel has used the illusion of the destructive nature of Hamas’ rockets to wage war on Palestinians, openly declaring it to all the world.  What they don’t say is “war” in Zionism’s world view  means , genocide is completely acceptable and a moral imperative.

Such talk of extermination, elimination was preceded by the complete and utter demonization of Palestinians by Israeli politicians and her supporters. 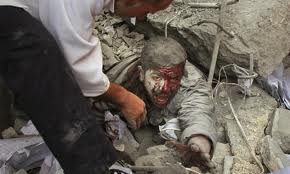 Ayelet Shaked a member of the Israeli parliament  in public remarks refers to Palestinians as “snakes” whose mothers should be killed their homes demolished and destroyed and Palestinian blood on the hands of Jews . It’s clear such a directive is being dutifully carried out by the IDF.

Israeli supporters have carried the baton of Zionist racism and Palestinian genocide to the pages of western media. The Wall Street Journal unabashedly published an editorial which conflates Palestinian civilians with Hamas thereby making it possible to kill them all. An Israeli “academic” called for the wholesale rape of Palestinian women as a way of deterring suicide  and presumably rocket attacks by Hamas against Israel, this despite the fact rape is a war crime. The Times of Israel published an op-ed piece that suggest the ‘goal of sustaining quiet is through genocide’……further expounding on the theme that mass murder is acceptable on the world stage.  The fact that such a hideous and reprehensible idea finds its way into the public discourse shows how much has been done to demonize Palestinian Arab Muslims to make their murder palatable. Were the object of such vilification Jews there would be world wide denouncement and a declaration of war, yet more and more the idea that Palestinians can be ravaged and murdered against all conventions of international civility except where zionism is concerned is finding traction among all segments of society here and abroad.  Frankly it’s ok for Israel to descend into this abyss; they can’t help it…it’s embedded in their ideology of race, superiority and power but to see it supported by the world’s exceptional democracy  is a travesty.