We’re still fresh out of Iraq and soon to be Afghanistan so we have to turn our attention…we the American public and our elected officials that is, towards something that can satisfy our lust for blood.  There are the children on the border of America coming up from central America….we’ve got that covered so now officials have turned their attention to Gaza.

My view of the Israeli operation [is] stay as long as you need to stay, go wherever you need to go, do deal with a viper’s nest called Hamas,” 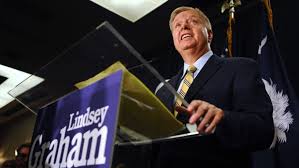 It’s clear Lindsay Graham, Republican senator from South Carolina has accepted the racist language of one Israeli elected official, Ayelet Shaked  who used similar language.  That shouldn’t surprise us being that it’s Graham who comes from South Carolina.  Birds of a feather flock together.  I  know he’s aware of the extent of what’s taking place in Gaza since he’s a member of the Armed Services committee but human suffering doesn’t happen, according to American officials, if the sufferers are Palestinian or people of color or Muslims.