Found this article floating around Facebook and thought it a harbinger of things to come in America.  Women in western societies are accepting Islam absent male influence; they are deciding on their own to embrace a religion that many see as oppressive to women and women’s rights, yet in doing so making a statement that they want to decide their future, their relationships independently and in their own way.  That’s what western societies offer their citizens…the right to choose, and it seems so long as freedom of religion is not criminalized like other free choices that used to be available to women….the number of women who embrace Islam will most likely increase for the time being.

However, this young woman’s life choices seems to be a precursor to becoming Muslim.  Reading her story might make it easier for objective observers to see why women in America accept Islam 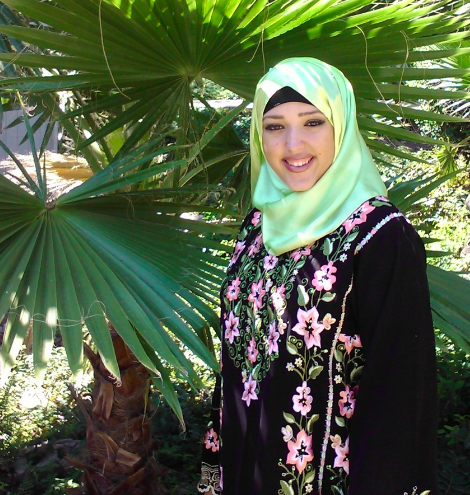 I am an American non-Muslim woman who has chosen to wear the hijab. Yes, you did read that correctly! I am not conducting an experiment on what the hijab is like or trying to explore the lives of Muslims. I have made a permanent life decision to only show my face and hands while in public, and I love it!

When I was younger, I found the hijab to be beautiful, but unfortunately I thought that a lot of the myths about the hijab were true, and so I was daunted by it. When I started college I studied Arabic and made friends with the Muslim students in my classes. A few of the girls wore a hijab, and even though I liked the look of it and respected their right to wear it, I thought that it was oppressive.

Unfortunately, around the same time, I began to notice that some of the men at my university would openly speak about their female classmates as though they were moving pieces of meat. I would often have to hear stories that I rather wouldn’t about what these boys would like to do to this girl or that one, and I began to notice their looks. Before entering university, I would catch men looking at me in an inappropriate way from time to time, and I would just ignore it, but after hearing these conversations and feeling their many looks, I couldn’t just ignore it anymore.

I mentioned how I felt to some of my classmates, and often I got responses like “boys will be boys,” or “it’s just their biology, they can’t help their behavior.” At the time, I bought these responses, and I thought that my discomfort was just my problem. I thought that these people had a right to behave the way they were, and I had no right to try and stop them. When I got engaged, this all changed.

My fiance is my soulmate. We met in junior high and were friends for years before we began dating. He had asked me out a few times before then, and even though I turned him down, he always behaved around me in a respectful way. It was because of how he always treated me that I eventually agreed to go out with him. The day he proposed to me is, so far, the happiest day of my life. Once I made the decision to make a lifelong commitment to him and only him, it seemed obvious that no one had the right to treat me like their sex object. Whenever I would notice someone looking at me inappropriately, I no longer felt uncomfortable, I felt outraged! But I still had no idea what I could do about it.

Finally, one day I saw one of my hijabi friends at school and ran over to say hi to her. She started to walk towards me, and for some reason I was just struck by her. She was wearing a scarf and an abayaa like she normally did, but in that moment she looked regal and powerful. In my mind I thought, “Wow, I want to look just like that.” I started researching the hijab, and I learned more about why Muslims wear a hijab, what makes a hijab a hijab, and how to wrap scarves. I watched youtube videos, browsed online hijab shops (including Haute Hijab) and the more I saw the more I was impressed by how these hijabi women exuded class and elegance. I wanted so much be like these women, and couldn’t get the hijab out of my mind. I even started dreaming about it!

There were many things I liked about the hijab. I liked the thought of having so much control over my body and how the outside world saw it, but what I also liked was how well it fit with my feminist beliefs. As a feminist I believe that women and men should be equals in society, and that the norm of treating women like sex objects is a form of unequal and unfair treatment. Women in American society are looked down upon if they don’t dress in order to be attractive for others, but I believe that women shouldn’t have to conform to some ridiculous and unattainable standard of beauty. The hijab is a way to be free of that.

However, the way the hijab best complemented my feminist beliefs was how it was about so much more than women’s clothing. As I understood it, the hijab is about how men and women should interact while in public. Men also dress in a non-revealing way, and both men and women are supposed to treat each other with respect. I was happy to learn that both men and women were expected to be responsible for their own actions, and impressed at how egalitarian the ideals of the hijab are.

At this point, I was certain that I wanted to wear a hijab, but I had a problem. I was afraid that wearing a hijab as a non-muslim would be offensive, and I was too afraid to ask my friends. I found one youtube video on the subject, and though it said that it wouldn’t be offensive, I still wasn’t sure. But eventually, after weeks of thinking about the hijab, I finally asked one of my friends. She told me that she wouldn’t be offended, and then pointed out that Muslims aren’t the only ones who wear headscarves, many Jews and Christians do as well.

I started wearing it off and on for a few weeks after that, and once I felt comfortable I always wore it when I left home. Soon after, I left for an internship in Jordan. I was afraid that the Jordanians would not like that I was wearing a hijab, but quickly after I got off the plane I found otherwise! When I told people that I was an American non-Muslim, they were excited to see that I wore a hijab. People often told me that they thought it was a very good thing that I was wearing it, and some people were touched that I would show such respect to their culture. Best of all, I will never forget the sight of a fully grown man jumping with excitement because I was wearing a jilbab! These memories will always bring warmth to my heart, and they give me strength back in the states when I have to deal with angry glares or awkward questions about my hijab.

Sometimes I will still catch men looking at me in a disrespectful way, but I take joy in knowing that though they may try, they still cannot see what they want to. Because of the hijab, I understand that my body is my right, and I will be forever grateful to the Muslim women who taught that to me.