It’s a common place phenomenon for Africa-American males in America; they automatically come under suspicion by members of the law enforcement community, but sometimes that unwanted and unwarranted attention comes at rather extreme measures

Jessie Thornton sleeps during the day and runs errands and works out during the night.

“My wife, she’s an ER nurse and works three 12-hour shifts, so I adjusted my schedule to be like her schedule,” said Thornton.

The 64-year-old retired firefighter moved to a Surprise retirement community from Ohio.

Jessie says his late hours have put him in the police spotlight.

His latest incident with Surprise police officers prompted Thornton to hire a lawyer with plans to sue the department. 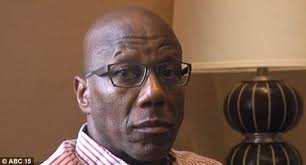 Around 11 p.m. Thornton, according to Surprise Police Department paperwork, was pulled over for crossing the white line in his lane.

“He (the officer) walked up and he said ‘I can tell you’re driving DUI by looking in your eyes,'” said Thornton.

The 64-year-old says his eyes could have been red because he had just left LA Fitness where he was in the pool swimming.

“I take my glasses off and he says, ‘You’ve got bloodshot eyes.’ I said, ‘I’ve been swimming at LA Fitness,’ and he says, ‘I think you’re DUI,'” said Thornton. “He (the officer) goes, ‘Well we’re going to do a sobriety test.’ I said, ‘OK, but I got bad knees and a bad hip with surgery in two days.'”

Medical documents show Thornton was scheduled to have hip replacement surgery two days after the incident.

According to the police report, the officer notes that Thornton does have a hip and knee problem.

Thornton said two other officers arrived and he conducted the sobriety test.

“At one point, one of the officers shined the light in my eye and said, ‘Oh, sorry,’ and asked the other officer if he was doing it right,'” said Thornton.

Thornton said he was then placed in handcuffs and told to sit on the curb.

“I couldn’t even sit on the ground like that and they knew it and I was like laying on the ground, then they put me in the back of an SUV and when I asked the officer to move her seat up ’cause my hip hurt she told me to stop whining,” said Thornton.

According to documents provided to ABC15 from the City of Surprise, Thornton was taken to police headquarters where he took a breathalyzer test.

The test, according to the police documents came back with a blood alcohol level of 0.000.

“Yes, I do the breathalyzer and it comes back zero, zero, zero,” said Thornton.

While in custody, a “DRE” or drug recognition expert is called to test Thornton.

“After he did all the tests, he says, ‘I would never have arrested you, you show no signs of impairment,'” said Thornton.

The Surprise resident is right. The police documents show the drug recognition officer wrote, “I conducted an evaluation of Jessie, in my opinion Jessie was not under the influence of drugs or alcohol.”

According the documents from the Surprise Police Department, the blood analysis showed no drugs were detected in Thornton’s blood.

Jessie’s car had been impounded and the MVD notified of the DUI charge.

“I then get this message that my license is being suspended and I have to take some sort of drinking class or something,” said Thornton.

According to the police documents, Thornton was later released to his wife.

“She was at work and had to come get me, it was a mess, I couldn’t believe it,” said Thornton. “On top of that my car was impounded on a Friday night and they said I couldn’t get it until Monday..”

“It was driving while black,” said Thornton.

“This is a case of D-W-B, driving while black,” said Thornton’s attorney Marc Victor.

Victor’s office has filed a notice of claim against the City of Surprise seeking $500,000.

“This is not the way American citizens ought to be treated by officers or treated by anybody for that matter,” said Victor.

To be clear, ABC15 provided the Surprise Police Department an opportunity to talk about Thornton’s incident, however, due to standard policy, the Department was unable to comment due to pending legal action.

The DUI charge was recently dropped, but Victor’s office claims it’s not enough.

“Here he (Jessie) is being harassed for no other reason than the color of his skin,” said Attorney Charity Clark. “It’s frustrating that somebody had to go through this type of experience, they poke and prod him and arrest him for nothing.”

Thornton said his daughter, who is in law enforcement, has filed an official complaint with the City of Surprise.

As for Jessie’s hip, medical documents show he did have hip replacement surgery days after the arrest.

“I just don’t want any of this to happen to somebody else,” said Thornton.

One thought on “Driving While Black in America”