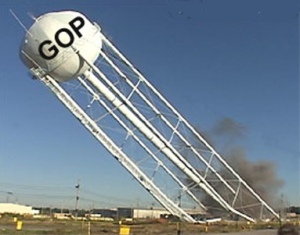 Mother Jones came up with the article, The GOP’s Anti-Muslim Wing Is in Retreat with several anecdotes they say point to such a decline, in which they claim

…after a November election that saw three of the party’s loudest voices on “creeping Shariah” defeated—and the GOP presidential nominee ignore the issue entirely—the anti-Islam movement within the Republican party may have peaked. Wary of further alienating a once-promising conservative constituency, mainstream Republican leaders have sought, publicly and behind closed doors, to distance themselves from the loudest of the Muslim-bashers in their midst.

…Randa Fahmy Hudome, a former Bush administration official, Washington lobbyist, and prominent Muslim Republican, notes: “There is a self-policing factor in the Republican party, when some members get a little off base on some of these issues. That’s the state of play right now.”

However the problem is not that racists are on the wane in the GOP and thus not able to mount an offensive against America’s Muslim population, the issue is one of the GOP’s own inadequacy in dealing with ANYTHING related to policy.  From issues of women’s reproductive rights, where GOP candidates for office put their foot in their mouths regarding rape and abortion, to issues of the economy where a disorganized GOP saw its House Majority Leader vote against a bill that the Speaker of the House voted for, the GOP is to today’s politics the equivalence of the Keystone Cops, bungling over themselves without any design or purpose.  It’s no wonder Islamophobia has escaped them……they can’t agree on anything nor make any effective statement about anything else!  And if you think this is hyperbole, watch how Senate Majority Leader Mitch McConnell did what has never been done before in the halls of Congress…filibuster his own motion in the Senate.

Even more recently Speaker of the House John Boehner was reamed a new one by Islamophobe Peter King over Boehner’s refusal to put on the floor of the House for a vote a bill for funds for Hurricane Sandy relief that directly affects King’s constituency.   King went so far as to say, the day after the bill didn’t appear, that he would urge everyone not to make  any financial contributions to his own Party’s coffers.  He’s  since ameliorated his remarks after being called an a$$hole by Boehner and being reasured the House would vote on relief funds; a really strange conflated way of dealing with matters of policy and collegiality if there ever was one. King as you remember was one of the Party’s stalwarts who led House hearings on the “threat” radical Islam posed to the Homeland and it seems almost like poetic justice that he would be snubbed and then insulted in much the same way he did to many of his Muslim constituents.  However, this points to the dysfunction of the Republican party in ways not seen in recent history.

There is still plenty of kindling available on the American landscape for the GOP to ignite as they gather allies in their march towards power.  In fact inciting racial animus has been a mainstay of political ascendancy in America and there’s no reason to think the party, once it gets its act together won’t resort to that tried and true tactic called demagoguery and whether you agree or disagree that hate crimes, i.e. those against Muslims, are on the wane or not, it’s still true that Muslims are targets of hate in America. A brief look at the headlines here, here and here are anecdotal evidence enough to point to the gold mine the GOP can cultivate when they have the presence of mind to get their act together and do so.