President Obama promised change and in many cases it has been a part of his administration, but with regards to foreign policy vis-a-vis Muslims in America and Islam Obama and career civil servants in government have bowed to the prejudices of an American public towards Muslims and maintained a position that only Muslims in America are responsible for terrorism.  The Washington Post produced a startling piece on the Department of Homeland Security’s report  on Right Wing Terrorism in America and how that DHS in many cases walked back its own report and continued its almost exclusive focus on Muslims.  The article, Homeland Security Department curtails home-grown terror analysis, originally published in June, 2011 gives perspective to the reluctance found today by many to label acts like the Aurora, Colorado and Milwaukee, Wisconsin massacres as acts of domestic terrorism.

The Department of Homeland Security has stepped back for the past two years from conducting its own intelligence and analysis of home-grown extremism, according to current and former department officials, even though law enforcement and civil rights experts have warned of rising extremist threats.

The department has cut the number of personnel studying domestic terrorism unrelated to Islam, canceled numerous state and local law enforcement briefings, and held up dissemination of nearly a dozen reports on extremist groups, the officials and others said.

The decision to reduce the department’s role was provoked by conservative criticism of an intelligence report on “Rightwing Extremism” issued four months into the Obama administration, the officials said. The report warned that the poor economy and Obama’s election could stir “violent radicalization,” but it was pilloried as an attack on conservative ideologies, including opponents of abortion and immigration.

In the two years since, the officials said, the analytical unit that produced that report has been effectively eviscerated. Much of its work — including a digest of domestic terror incidents and the distribution of definitions for terms such as “white supremacist” and “Christian Identity” — has been blocked.

The threat of Islamic-related terrorism in the United States has by all accounts captured the most attention and resources at DHS since it was formed in 2002. But a study conducted for the department last October concluded that a majority of the 86 major foiled and executed terrorist plots in the United States from 1999 to 2009 were unrelated to al-Qaeda and allied movements.

“Do not overlook other types of terrorist groups,” the report warned, noting that five purely domestic groups had considered using weapons of mass destruction in that period.

Conservatives are very good at playing the victim card, that they are plundered, misrepresented and unfairly singled out, but it would appear based on the WashPo article that conservatives during the administration of a newly elected and popular Democratic president were able to get the Obama administration to abandon its own report on domestic terrorism and pursue, rather persecute Muslim Americans even though the statistics don’t support that policy. 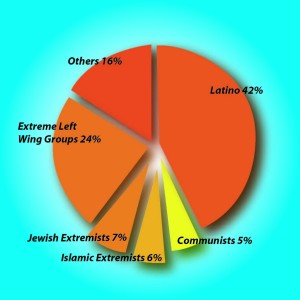 A look at the acts of terrorism committed  on US soil by various groups between 1980-2005 show that only 6% of them were committed  by Muslims or affiliated Muslim groups.  The only other group lower was Communists at 5%.  Yet there exists this proclivity in modern day America to base policy on the minute minority of cases that appear before government while ignoring the overwhelming majority of cases that beg for policy review and follow up.  It is also the reason why acts like Aurora and Milwaukee can get swept under the rug by government and media because the perpetrators of those crimes don’t fit the profile that has been carefully crafted by xenophobic policy wonks with an agenda to advance and a budget to get appropriated.  For them it is far easier to sell fear and loathing against what is for now an unknown, strange, eccentric group of people than  it is for people who look and sound like us.  That the GOP is leading the way in this savage attack against Muslim Americans should come as nothing new.  Unfortunately, that a Democratic administration swept into office because people wanted “Change” has decidedly not brought about that change but continued the status quo is fraudulent.