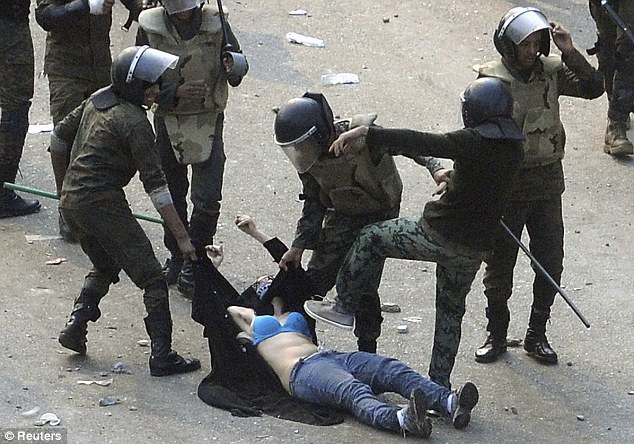 We may never know the name of the woman pictured here who was brutalized by the Egyptian army in horrific ways, but she is symbolic of what happens to Egyptians, men and particularly women, under the military rule of the government of Egypt.  There is nothing that this woman could have done to merit the public treatment she received at the hands of the men in this picture.  We will never know if the men are Christian or Muslim……does it matter, they  disrobed her purposefully and publicly and beat her mercilessly and senselessly.    This is the fate of women who protest against the government of Egypt and it doesn’t matter to the thugs who participate in this mass orgy of violence and sexual humiliation whether their victims are Muslim, Christian, Jewish,  Egyptian or foreign, expressions of dissent of any form is not tolerated and public examples must be made of those who violate that unwritten tradition or culture.  This is the face of totalitarianism, not Islam, of autocratic militarism that has plagued Egyptian society, our ally, for over 30 years.  It is what Lara Logan saw and faced during her last visit to Tahrir Square.  It is raw, naked brutal, and it is ugly.  You can read about what else women in Egypt are facing and have faced from the military regime here.  The accounts there are demoralizing, and inhumane and characteristic of military rule which has its own precepts and pillars, in that part of the world.