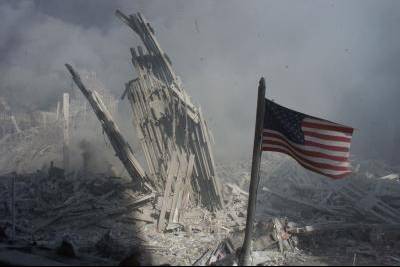 The memory of 9/11 should be buried in a time capsule and sent to the earth’s core to be forever forgotten.  As we approach September 11, 2011, what happened 10 years ago should be blocked from the Nation’s conscience.  At the very least, if not, then we should also remember what we did and have done since 9/11.

We have invaded two countries whose governments had nothing at all to do with the events of that day.  We oversaw the assassination of one country’s president/ruler/leader and attempted to kill or murder another.  We fostered an entire administration of international war criminals who went about justifying everything that before 9/11 we opposed and fought against ourselves.  We re-elected a president who was responsible for the plunder of the national treasury at the hands of greedy, despotic bankers who felt no remorse nor sense of responsibility to the welfare or anyone but themselves.  We became cannibals on September 11, 2001, turning against ourselves, engaging in demagoguery and hatred that haven’t been seen since the days of Reconstruction; pitting one religious community against another in nonsensical, fabricated assertions that are not even remotely connected to reality.  We have exaggerated the political differences among us to heights of disrespect and rude discourse to the point the Nation’s interests are no longer important, only partisan political gains.  Whereas just 5 short years ago we were demanding the country respect its president, we now heap scorn upon him with sophomoric imagery becoming of elementary illiterates and all this under the gaze of an omnipotent media which spun the corporate line to make it palatable to an angry country that wanted nothing more than blood…….anyone’s blood, even the blood of innocents.

We will be regaled with images and orchestral music evoking the pain and suffering we experienced that day, while our own war criminals’ victims have no place in our national conscience  and the crimes which they suffered go unpunished.  We were once a nation that demanded justice, yet we willingly want to see our criminals spared that process.  We no longer have leaders who inspire us, we elect and want leaders who frighten and anger us, who push us towards hatred of our fellow citizens who are different than us because of faith or skin color.  We have gone backwards in time…..to the time of our primal ancestors who killed their brothers for no apparent reason than jealousy or envy and that seems to be ok with a great many of us who want to “remember” 9/11.

I want to forget 9/11 and  all that because our country is greater than all the things previously mentioned in this piece.  Born out of hope and struggle we achieved greatness until we started remembering 9/11 at which time we fell out of Grace.  We cannot continue down the paths we started on 9/12 without negative consequences, yet we seem to not even consider what those consequences are, focusing instead on our suffering while ignoring what we have reaped on others.  In other words, we’ve become a country of cry babies….bellyaching about every perceived injustice we’ve had while forgetting about our own criminality.

I want no part of remembering 9/11 because I remember everything that happened after 9/11 and it was/is just as much a nightmare for me as the events on that awful day.  But unless we as a Nation make amends for what happened on 9/11 and beyond there will be more 9/11s, not by unknown, foreign, dark skinned people with funny names invading our shores, but rather at the hands of people we elect to office, or listen to or watch on our ever present media, or our neighbors unemployed for years with no sign of hope, or business people who either want more or don’t have enough and on and on it goes.  I want no part of that America and I want no part of anything that brings it on.  I want to forget 9/11.