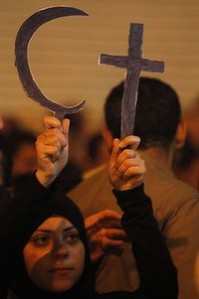 An Egyptian church was attacked at the start of the new year and scores of people were killed.  That incident was highlighted prominently by worldwide mainstream media and it brought out the usual Islamophobes, including the president of France, who lamented the supposed ‘ethnic cleansing’ of Christians from the Middle East.  The irony of such remarks coming from a president of France who wants to condemn to failure the appearance of  Islam in France is blatantly hypocritical to say the least.  But what you haven’t seen or perhaps heard much of is the response of Egyptians to this attack and in light of the Islamophobic drenched atmosphere it might surprise you.

Egypt’s majority Muslim population stuck to its word Thursday night. What had been a promise of solidarity to the weary Coptic community, was honoured, when thousands of Muslims showed up at Coptic Christmas eve mass services in churches around the country and at candle light vigils held outside.From the well-known to the unknown, Muslims had offered their bodies as “human shields” for last night’s mass, making a pledge to collectively fight the threat of Islamic militants and towards an Egypt free from sectarian strife.

In the days following the brutal attack on Saints Church in Alexandria, which left 21 dead on New Year’ eve, solidarity between Muslims and Copts has seen an unprecedented peak. Millions of Egyptians changed their Facebook profile pictures to the image of a cross within a crescent – the symbol of an “Egypt for All”. Around the city, banners went up calling for unity, and depicting mosques and churches, crosses and crescents, together as one.

The blogsphere picked up on this show of solidarity but main stream media chose to ignore it, although they covered the deaths of Egypt’s Christians rather extensively.  Perhaps that’s why Sarkozy reacted so impetuously to the tragedy; he should read more than his government controlled press.  It should be noted that the terrorist attack on Egypt’s Christians was roundly condemned by most major Muslim organizations and leaders.