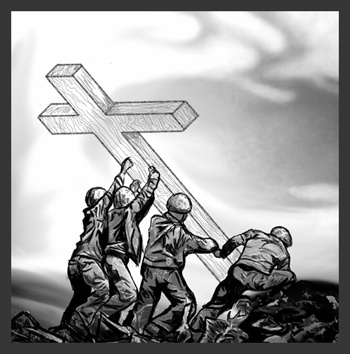 slamophobic racists are all singing the dangers of Shari’ah law as something that will overtake the Nation and either make everyone Muslim or kill those who don’t convert.  From the looks of this article, their fears are misplaced; rather it is their own Christian-Judeo tradition which has enveloped the  US military they should be worried about.  Imagine, an American military force made up of Christians determining whether you meet the criteria for safety or punishment.  Think it won’t happen here?  Maybe it already is.

The Army said Friday it was investigating a claim that dozens of soldiers who refused to attend a Christian band’s concert at a Virginia military base were banished to their barracks and told to clean them up.Fort Eustis spokesman Rick Haverinen told The Associated Press he couldn’t comment on the specifics of the investigation. At the Pentagon, Army spokesman Col. Thomas Collins said the military shouldn’t impose religious views on soldiers.

“If something like that were to have happened, it would be contrary to Army policy,” Collins said.

Pvt. Anthony Smith said he and other soldiers felt pressured to attend the May concert while stationed at the Newport News base, home of the Army’s Transportation Corps.

“My whole issue was I don’t need to be preached at,” Smith said in a phone interview from Phoenix, where he is stationed with the National Guard. “That’s not what I signed up for.”

Smith, 21, was stationed in Virginia for nearly seven months for helicopter electrician training when the Christian rock group BarlowGirl played as part of the “Commanding General’s Spiritual Fitness Concerts.”

“Instead of being released to our personal time, we were locked down,” Smith said. “It seemed very much like a punishment.”

You can read more about the efforts of many in the military to make it Christian, thereby usurping the Constitution, here.

Pay close attention to what Charlton Heston had to say to those who wanted his organization to “move” elsewhere after another American tragedy.