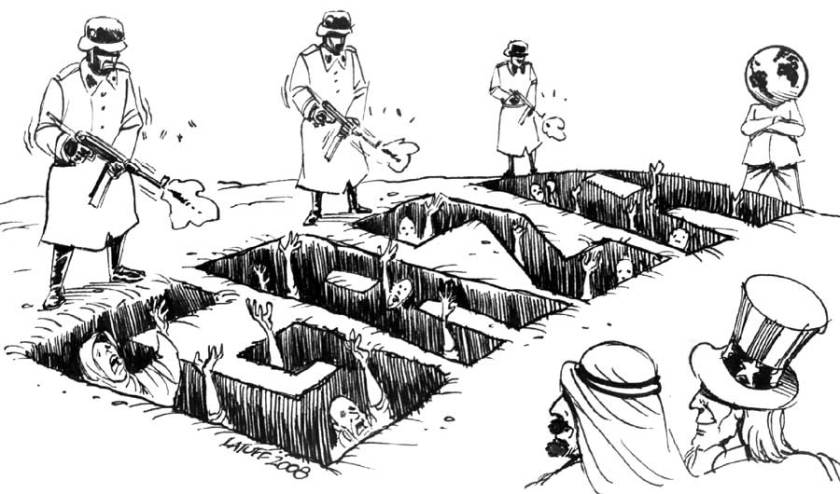 If you keep your ears tuned you can begin to hear the hysterical cries of political zionism which are sure to destroy the lives of all those it touches.  The Free Gaza flotilla has really turned out the worst in this ideology which is bereft of any social benefit.  The followers have engaged in near maniacal rhetoric which sounds frightening.  Take a look

By Israel fighting as if their lives actually depended on it — which it does — Israel will, in fact, be taken more seriously by the international scholyard (sic) bullies. Bring back the “fear factor.” It is the reason why in 1980 Iran released the hostages when Reagan became president, and not during Carter’s presidency, because Carter was rightly seen by the Iranians as a wimp and Reagan was feared as a trigger-happy cowboy.

We are no longer in the general Euopean anti-Semitism mode but deeper into the new run-up (in the Arab mind) to the Final Solution — the extermination of Israel. In old Germany, a Jew sitting on an Aryan park bench was as much of a criminal as a Jew who robs a bank. So we might as well rob the bank. We might as well take out Iran as take out the flotilla.

The Other Side is fearless now. If someone is going to fear anyone, make the bad guys fear Israel. Right now, too many Jews fear the world. Turn the tables. Make the bad guys think that Israel is craziest S.O.B. in the room. Make everyone wonder what the Jews will do. The world will be furious? Imagine that. Imagine winning.

Aside from the fact that his interpretation of an historical event, the Iranian hostage taking is skewed, the author of this piece portrays Israel as if it is a victim when in fact it is the perpetrator.  Political zionism takes as it mantra ‘might makes right’ and has  always relied on the attitude of fear and loathing .  It is just such a philosophy that drives American foreign policy today.  Recall the name of the combat operations started in Iraq: ‘shock and awe’.

Now we are faced with the phenomenon of anyone who opposes the policy of the government of Israel is a terrorist.  The label is pinned to the lapel of anyone who disagrees with state policy, even while believing in the right of the state to exist.  What Israelis fear most is delegitimization, or the exposure of their bankrupt ideology and all it’s sins, to the rest of the world.  You can read more about that here. What better way to fight this existential threat than to hurl false and misleading accusations against one’s opponents thereby keeping them off guard and off message.  That was the reason why cameras were confiscated onboard the Gaza flotilla, because the image of Israel had to be extricated from the brutality of the assault on unarmed people carrying relief supplies to other unarmed, defenseless disenfranchised people and cleaned up enough to present to the world.

Israel simply cannot stand criticism and when they get it they lash out by calling their foes terrorists.  The Arab member of the Knesset was called one, the musical group which cancelled its concert dates in Israel were cultural terrorists and if that’s not good enough then gets called  a supporter or lover of terrorist, something former NYC mayor Ed Koch called a reporter who opposed the illegal boarding of the Gaza flotilla. Everyone fears terrorists and with that one word, Israel is able to disrupt and quell dissent while she continues with her murderous ventures at home, in the occupied territories and abroad.

Let there be no mistake about, Israel policy is built on death and the who the victim is is irrelevant to the Israelis.  They are able to count on any number of people to rewrite history, soften the impact of their destruction or turn victims, the aggrieved into perpetrators and hostiles.  This tendency on their part is so apparent that voices from ranks heretofore silent are coming to the fore:

Killing civilians has been State policy in Israel since 1948 (and, prior to that, of Zionism). It’s not about “tragic mistakes”, there’s no “deep regret for the incident”. Killing civilians is what Israel has founded itself on with the ethnic cleansing of Palestine and this is what allows it to live.

What is to be added to this is the outright impunity Israel enjoys due to its being the largest American military base on the planet, and, only marginally, due to its being a Jewish State originated from the Holocaust.

On January 1948, the founding fathers of Israel, Yigal Allon and Ben Gurion, declared that “there is a need for a brutal reaction. We need to be accurate about those we hit, if we accuse a family we need to harm them without mercy, women and children included…. There is no need to distinguish between guilty and not guilty”. In 1978, the Israeli Chief of Staff, Mordechai Gur, told the Israeli military analyst Ze’ev Schiff that “for 30 years we have been fighting a war against civilians who live in villages…..we struck civilians consciously because they deserved it….our army has never distinguished between civilian and military targets but purposely attacked civilian targets”. In 2000, Dan Halutz, who also was later to be the Israeli Chief of Staff, after an air strike he himself conducted and in which civilians were slain, claimed “What did I feel? Only a light bump to the plane as a result of the bomb’s release but a second later it’s gone”.

Such obvious and apparent brutality has forced some who would probably know what they are talking about  to conclude the Israelis act like Nazis. The way for America to rid itself of this problem is to elect politicians who are more concerned about democracy and human rights than fear and war; to boycott buying any thing made in Israel and to not visit the holy places that are under Israeli control.  There’s surely nothing holy about armed soldiers walking among worshippers of any faith.  Israel loathes and fears isolation, yet its policies do nothing more than force that upon Israeli citizens. Whatever path freedom loving people choose it must be made abundantly clear to the Israelis they cannot commit murder and get away with it.