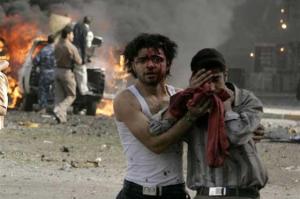 The person who took the photograph of the carnage to the left became its victim at the hands of American forces who went to Iraq to liberate Iraqis from their tyrannical ruler but who became tyrants and murderers themselves.  The death of Reuters photographer Namir Noor-Eldeen and his colleague Saeed Chmagh, a death vividly caught on tape is perhaps the most accurate depiction of what the Iraqi war brought to the shores of both Iraq and America.

To Iraqis such tragic events were normal occurrences in their interaction with American forces who all too often shot and killed first and rarely asked questions later if at all.  People on the ground in Iraq are too acquainted with the reality that the US military has very little regard for Iraqi lives where the total number of deaths number in the tens of thousands.  Having been besieged by all forces who claimed to act in their best interests, from the government of their own country, to their “liberators” who came to to offer them relief, Iraqis have been slaughtered over the past decade.  In many respects that slaughter has been analyzed and presented to the public to justify public policy in all instances, except those which applied to the US military, when Iraqi civilians ran up against US  forces at which point the public was met with a stone walling military complex and an indifferent media.

The very nature of war means the inevitability of what is presented on film linked above would occur on a basis as often as there is an occupying force in a foreign land interacting with the indigenous population.  The euphemisms employed by the Bush administration to make the invasion more palatable were just as meaningless as the excuses now being given for the action taken against unarmed civilians and children who in the course of their daily lives ran into a force far more willing to shoot them than to help them.  Shooting is the job of soldiers; liberation is the job of those who want to be liberated and sometimes they are convergent ideas and actions but in today’s meme of invasion and occupation they usually are not.  Therefore it is reasonable and necessary to say that what happened to the two Reuters employees is a normal everyday circumstance, no doubt one happening even today,  and if you find it so disturbing as I do, the only thing that will change that is the unconditional withdrawal of American forces from Iraq and nothing less.

This is not the time for back slapping and self-congratulations among those of us who opposed the war by saying this kind of incident was an inevitability of war.  Such arrogance doesn’t help the scores of families, almost every Iraqi one, who have been afflicted by this tragedy.  Nor will a revision of the rules of engagement offer any relief.  In fact as we have mentioned on the pages of Miscellany101 before, there are some who say that the rules of engagement should not spare civilians, and that military personnel should give no consideration to them at all.  Therefore, to abandon this massacre means by necessity abandoning the occupation of Iraq by the American military.  Does that mean murder and mayhem in Iraq will stop?  No it doesn’t, but its occurrence will diminish greatly and we will not be responsible for it, nor blamed for it when it does.  In order to be a society based on the rule of law, we must first apply that rule to ourselves before we try to make others accountable.  Illegal, discriminatory, unjust, murderous wars must be stopped at once before any other declarations of guilt can be raised.  If nothing else, let us hope that will be the outcome of a murder caught on tape.

“If you kill a civilian he becomes an insurgent because you retroactively make that person a threat.”

I mentioned above how the murder of the two Iraqi Reuters reporters was really a normal, everyday event that was brought on by the presence of an occupying force in Iraq.  To underscore that point comes this article where soldiers who served in Iraq make the same claim, matter of factly that ‘we were told to shoot people and the officers would take care of us’.  Military personnel were sent to Iraq to kill not to liberate or win the hearts of minds of the people there.  Listen to some of the testimonies:

Vincent Emanuele, a Marine rifleman who spent a year in the al-Qaim area of Iraq near the Syrian border, told of emptying magazines of bullets into the city without identifying targets, running over corpses with Humvees and stopping to take “trophy” photos of bodies….

Steve Casey served in Iraq for over a year starting in mid-2003.

“We were scheduled to go home in April 2004, but due to rising violence we stayed in with Operation Blackjack,” Casey said, “I watched soldiers firing into the radiators and windows of oncoming vehicles. Those who didn’t turn around were unfortunately neutralized one way or another – well over 20 times I personally witnessed this. There was a lot of collateral damage.”

Jason Hurd served in central Baghdad from November 2004 until November 2005. He told of how, after his unit took “stray rounds” from a nearby firefight, a machine gunner responded by firing over 200 rounds into a nearby building.

“We fired indiscriminately at this building,” he said. “Things like that happened every day in Iraq. We reacted out of fear for our lives, and we reacted with total destruction.”

Such was the atmosphere created by the US military in Iraq which literally forced military personnel to take part in the types of atrocities evident in the video tape above.