From the people who brought you this 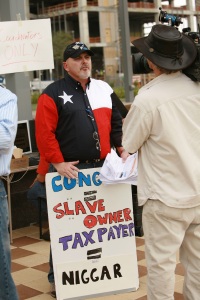 One of the opening speakers for the convention was former House Republican Representative Tom Tancredo.  Not surprisingly Tancredo bemoaned the election of Barack Obama as President of the United States.  What was a surprise was the explanation Tancredo gave for President Obama’s election.  Tancredo claimed that President Obama was elected became we “do not have a civics, literacy test before people can vote in this country.”

Thus another attempt to de-legitimize Obama’s election as president is being carried out by the opposition party.