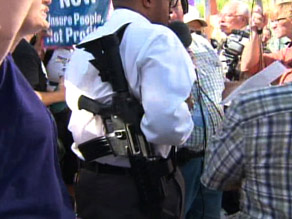 I am a big time supporter of the 2nd amendment and believe every citizen should exercise his or her right to own firearms.  EVERY citizen.  I am somewhat mildly amused at the demonstrators mingling with crowds of  protesters at President Obama’s appearances at different venues across America, while other citizens take it all in and law enforcement officers are civil during the display of armed resistance to a President of the United States and I ask myself the question what would be the reaction of the very same group of people to the presence of armed Muslims outside a George Bush appearance during his war on terror era?  No doubt it would provoke mass detention of every member of the Islamic faith in America’s borders, and a prohibition of some sort that would single out that group from legally owning firearms.  I doubt very seriously that those who are carrying their weapons at such events as those which Obama has spoken are true supporters of the 2nd amendment in all its meaning but rather using it as a symbol of resistance to government policies.  As such, they are selfish ideologues  whose blatant disregard for the public safety and well being jeopardize the amendment more than anything Obama could do with all of big government behind him.   How would the people openly carrying firearms in protest of Obama’s policies act towards similarly armed citizens in close proximity with signs supporting an Obama led federal government, and what would be the stance of till now completely law observant local and federal law officials to such a situation?  It’s ironic to see such people standing among crowds with signs protesting big government when these same signs were absent during the Bush administration which ratcheted up the size of government by way of its phony war on terror.   I wonder what would be the response of today’s patriots patrolling the grounds near the appearance of a black POTUS to the presence of armed opponents of the Bush doctrine of preemptive strikes and wars of aggression at one of Bush’s rallies not so many years ago? I remember clearly supporters of Bush saying sometimes rights have to be curtailed, suspended, abridged, infringed upon, at times in order to protect the public.  Certainly that would not be their cry today, and if they say they believe  fundamentally in the right of citizens to keep and bear arms, no matter what their persuasion, I would ask them to come out and support the trial of Daniel Boyd whose crime it seems is that he too owned guns and differed with the current political winds.  I don’t think you’ll see the guy in the above photo or any others like him at Boyd’s trial.