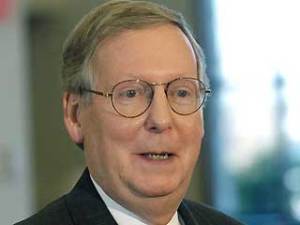 A duh moment if there ever was one.

“President Bush had become extremely unpopular, and politically he was sort of a millstone around our necks in both ’06 and ’08,” McConnell told reporters Friday. “We now have the opportunity to be on offense, offer our own ideas and we will win some.”

Partisan politics if there ever was any; McConnell misspoke.  Bush was a millstone around the necks of the entire country and probably a few foreign countries as well.  When those of us were saying the same thing during the height of the “terror campaign” waged by the same Republican party of which McConnell is a part our citizenship was threatened and our motives questioned.  We were called traitors and the largest rights grab of the federal government was done in our names.  Is it any wonder more and more people have mistrust for elected officials.